Reuland Food Service began as a cottage industry in the 1950âs with Paul and Charleen Reuland preparing food at their home in Auroraâs east side and serving it at parties for their family and friends. Paul worked his full-time job at Thor Power Tool and he and Charleen worked on weekends catering these functions. As their four kids grew, they all helped at one time or another. 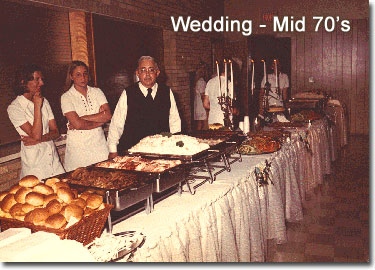 The most popular standard fare â their special roast beef sandwiches on buttery buns, freshly made, wholesome potato salad and baked beans remain Reuland classics, but through the years, their menu selections and service options have expanded greatly. This constant blending of innovative new tastes with familiar old favorites is one of their strongest assets and has made Reulandâs fresh for over fifty years.

As the demand for Reulandâs unique taste and service grew, it was determined that they needed to operate out of a separate building with larger facilities and more professional equipment. Paul and Charleen bought the old Fruit Juice House at 115 Oak Avenue in 1970. Their dream was to open a delicatessen and catering facility. Paul continued to work his full-time job and after oldest son Jeffâs graduation from prestigious Culinary Institute of America in 1970, he began working full-time to remodel the Oak Avenue building with his father and took over management of Reuland Food Service Catering and Delicatessen opening in early 1971.

After the youngest son, Dan, served in the U.S. Marines, he also joined the family in the business.

It has continued to grow in the years following their opening at the present site. Neighboring properties were purchased to expand over the years. Additions and improvements have included a larger, more efficient main kitchen area, a dining room that seats ninety and a downstairs banquet room that will accommodate 110 guests and parking facilities for the growing customer needs.

The acquisition of large gas grills beginning in 1977 enabled them to do on-site grilling for thousands. That venue became very popular for company picnics and outdoor functions. The grill is also used for cooking out hamburgers, hot dogs, brats and other picnic fare at the deli during the weekday lunch hours in the summer months. Customers look forward to the start of the cookout season and the smell of burgers entices hungry folks to the neighborhood lunchtime party. 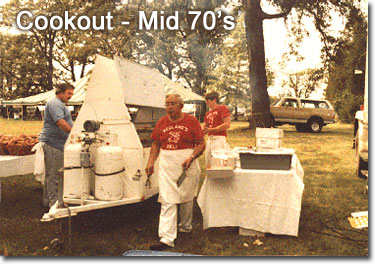 The already full-service food service branched out to do even more high-end cocktail, dinner and theme parties such as luaus, Oktoberfests and elegant dinner parties for any number of guests.

In 1990, Jeff and Dan bought the business from their parents. Charleen continued to prepare with love many of the salads and soups she has been making for over fifty years. Many of her delicious recipes were handed down from family members and are closely guarded secrets that only a privileged few share. Charleen decided to officially retire in 2004.

In 1995, Dan and his wife Mary sold their share of Reuland Food Service to Jeff and his wife, Cindi. Jeff, Brigit, and Ryan Reuland share in the ownership today.

Jeffâs oldest daughter, Brigit, has had hands-on training with her father begun during her high school years, expanding since her graduation in 1994 to include almost every facet of the food service industry. Ryan joined the team in 2000, focusing on the business end. Many of the employees who you will meet at Reuland's have worked there for twenty or more years and have become a part of the family. John Miller since 1974 and Julie Tuma since 1983 are why Reuland Food Service continues to flourish today.

When you visit Reulandâs Deli, youâll find the second and third generations carrying on the family tradition of consistently delicious homemade food and friendly personal service. Through the catering end of their business, Reuland Food Service offers creativity, versatility, and, of course, the same wonderful food and friendly service people have been counting on for over fifty years.Â

Thank you to our loyal customers,